Addictions are hard to stop. Anyone who has tried to change a behavior knows how much work and effort it takes. Addictions often start because someone introduces us to a substance or stimulus, or out of curiosity we discover it on our own. Sometimes it is a combination of being introduced to the stimulus and then, through our own curiosity, continuing the habit. Simply put, an addiction is something we can’t leave alone regardless of how hard we might try. This is the “Parable of the Lamb,” which illustrates the addictive cycle.

Parable of the Lamb 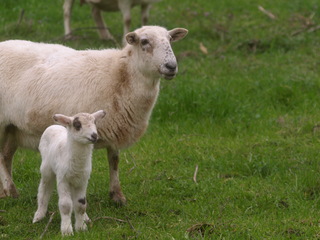 Parable of the Lamb

There was once a little lamb born into a very good flock. The lamb was pure and innocent. As he grew older, there came a time when the other lambs teased him and none of them wanted to play with him. The lamb felt rejected and lonely, and not even his parents seemed to understand. One day he got into a fight with them and concluded that his parents didn’t love him. Feeling totally rejected, he began to feel very sorry for himself. His self-pity turned to anger, and he decided to leave the flock.

The lamb walked alone for a while; then another lamb happened by.

He didn’t know him very well, but they soon found out that they had a lot in common. At last he had someone to talk with who would understand his story of self-pity.

After listening for about an hour, the friend said, “I know where the farmer keeps his grain.  Let’s go to his grain bin.  It will help you feel better.  It always works for me.”

To get to the farmer’s bin, the lamb had to leave the pasture—something he had been taught by his parents to never do.  The lamb said to himself, “It’s not my fault I’m leaving the pasture.  It’s my parents’ fault.  They are making me leave because of the way they treated me.”  Keeping that thought in mind, he kneeled down, squeezed through the small hole in the fence and began to explore the pasture next door with his new friend.

The grass was much greener there and everything seemed more enticing.  The lamb was so excited that he didn’t notice any of the ant beds or the snakes that slithered through the new pasture.  Since he had been troubled with ants and snakes in the old pasture, this new pasture seemed better.

While in the pasture, he could forget his feelings of rejection, self-pity, and anger.  He felt alive.  There were many new things that attracted him.  He said, “This is what I’ve been looking for.  This is the answer to all my problems.”

His friend led him to the grain bin behind the farmer’s barn.  The grain tasted delicious.  How could something that tasted so good and made him feel so alive be bad for him?

That night he went back to his own pasture.  His old feelings of rejection, self-pity, and anger were still with him.  In addition, he now felt guilty for going into the forbidden pasture and eating the grain because the lamb knew that, while there is a time and place for grain, the amounts had to be carefully limited.  Grain was not part of the young lamb’s normal diet and if he ate too much grain, it could even cause his death.  His feelings of guilt stayed with him for several days.  He couldn’t shake them.  He knew what he had done was not right.  As he tried to forget the guilt, he started daydreaming about the farmer’s grain bin.  Whenever he was thinking about the grain bin, he didn’t feel guilty.  Fantasizing about the grain bin soon was not enough; he returned to the grain bin—this time without his friend.  While his head was in the grain bin, he felt like a new person, and for the moment he forgot his guilt, rejection and self-pity.  One the way home, though, he felt even more guilty and depressed.

The lamb wanted to escape feeling rejected, lonely, angry, and hurt; but all his old problems were still with him.  He soon learned that he could forget them only when he was at the grain bin, so it became very difficult for him to leave it alone.  The grain

bin—which he thought was the answer to his problems soon became his biggest problem.  Too much grain doesn’t digest quickly enough and could ferment in his stomach creating gas—enough to kill him.  Even full-grown sheep can die from an overdose of grain.  The lamb had already experienced serious discomfort from the grain; he knew he must stop going to the grain bin.

On the way home, he would be filled with depression and guilt once more.  He had told himself this would never ever happen again.  Each time he went to the grain bin he promised himself he would never return.  But he went back again and again.